As was seen most clearly last month, if artists and labels do not release new music, the music charts stay about the same as they were before. This most applies to full-length studio albums that are usually released on Friday. This rule remains true this week because no major artist released a major album that significantly changed the charts. The exception this weekend was DJ Khaled, who released two songs in collaboration with Drake. According to Music Maven’s proprietary technology — which provides the most current and accurate data on the performance of all artists and songs in daily music charts — the late Juice WRLD remains The Most Streamed Artist a week after the release of his posthumous album, Legends Never Die. Fans have listened to Juice WRLD’s music far more than any other release this year.

Juice WRLD’s stunning 77.7M streams on the first day of his latest release was no fluke. It won another 51M streams the next day, and between 30-40M streams every day since. Those nearly 80M streams on day one were much higher than any other major debut this year, and were double the total streams of all the other top ten Most Streamed Artists. That high performance has been followed by strong numbers on each day after. His almost 30M streams are still three times higher than his next competitor, the late Pop Smoke at 8M streams, since his estate released a posthumous album the work before Juice WRLD’s latest.

Juice WRLD also continues to dominate the song charts. 18 of the 21 songs on Legends Never Die are still in the top 40 Most Streamed Songs. 4 of those are in the top 10 and 8 are in the top 20. For example, “Come & Go,” featuring Marshmello, is still his most streamed, at 2.7M, followed by “Wishing Well” at 2.5M. In short, Juice WRLD continues to haunt the charts, and his music still does not allow much competition. With Pop Smoke still at number two Most Streamed, by far the most listened to music at midsummer and midyear is posthumous.

The only contradiction to this trend, with living artists rising against artists no longer living, is another one by DJ Khaled, or rather another two, both featuring Drake. The New Orleans-born DJ, raised by Palestinian parents as Khaled Mohamed Khaled, may be the most sought-after producer in music today. DJ Khaled’s name and talent are so powerful that he can release tracks he has produced under his name with perhaps the most sought-after artist, Drake, on lyrics, and still far outperform that artist in total streams. Drake as Drake is only thirteenth Most Streamed with 2.2M streams, despite his May Day release, Dark Lane Demo Tapes.

DJ Khaled hit number four with a bullet, at almost 5M streams, on the strength of his production and name recognition for only two preview singles off his future album, Khaled Khaled. The first of those songs, “POPSTAR,” featuring Drake — not to be confused with DaBaby’s “POP STAR,” featuring Kevin Gates from last year, or DaBaby’s “ROCKSTAR,” featuring Roddy Ricch, a hit since this past April — quickly rose to prominence on the Most Streamed Song chart with 3.2M streams. DJ Khaled’s “GREECE,” also featuring Drake, also made it to the top 10 most streamed with 1.7M streams.

DJ Khaled’s latest release with Drake this weekend is a signal that living artists are gaining on those no longer, and that artists and labels are returning to earlier release patterns after withholding music for the first half of the summer due to the struggles over race and justice. 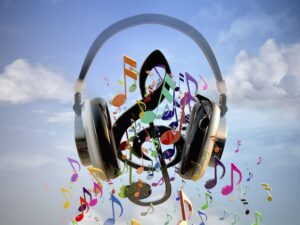 The saxophone is one of the easiest woodwind … END_OF_DOCUMENT_TOKEN_TO_BE_REPLACED

Finding the best pages to buy music online is a … END_OF_DOCUMENT_TOKEN_TO_BE_REPLACED